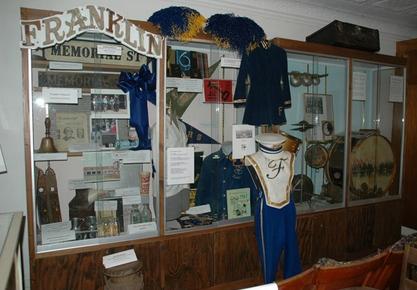 At the end of the hallway is the front parlor, with furnishings from the Victorian era, marking the period in which the three story addition was built by Rufus Tay in 1858. On the wall  are the large framed portrait photographs of the “movers and shakers” of Franklin’s 19th century. On the left is the secretary desk, placed there to honor Joan E. Young’s many years of service as the Society’s Secretary, with a copy of some of her hand-written minutes of a monthly meeting. 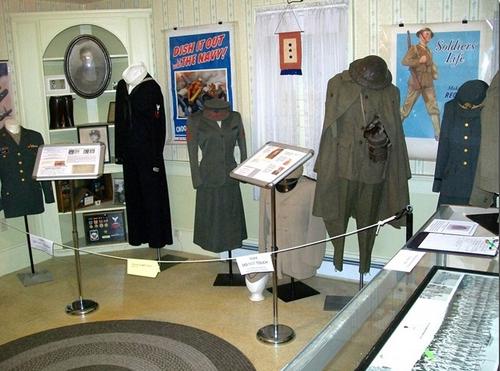 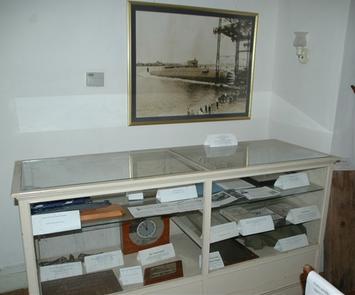 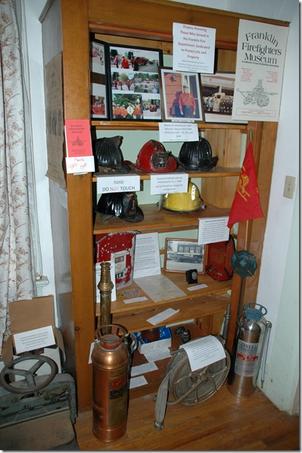 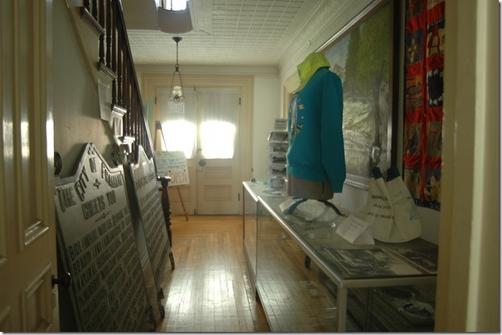 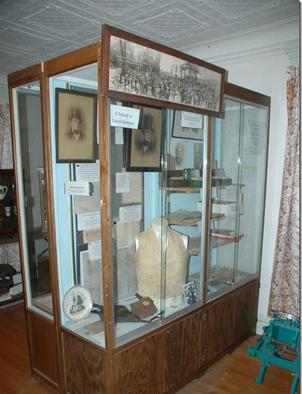 On the far side of the front of the Webster portion of the building, what would have been a dining room in Webster’s day, is the tribute to honor all those from Franklin who served their country with distinction and honor in all wars. Represented are uniforms from WWI, WWII, peace time, and Vietnam. All worn by residents of Franklin, now gone but never forgotten. One the right frame can just be seen a hint of the latest display, devoted to Roger S. Martin, the first casualty from Franklin in WWII, and for whom the high school football field was dedicated in 1943. His younger brother Neal, who served in the European theater and recently passed away at age 100 and kept all of Roger’s belongings, will also be honored along with another brother Ray, whose service came after the war. The exhibit is being planned and created with the help of Neal’s daughter Lisa Martin, to keep alive the patriotic spirit embodied by all the Martins.

Deeper into the room can be found the iconic image of Daniel seated beneath a tree at the Birthplace, which became the basis of the official Franklin City Seal, a case of Franklin ceramic and glass souvenirs, and some of the earliest documents detailing the beginning days of Franklin.

In the main display room, named to honor the authors of “The History of Franklin” Alice M. Shepard and John S. Shepard Jr., there is a myriad of objects to amaze and delight.
In one corner as you enter is the tribute to the Franklin Firefighters Museum.

The hallway connecting the main exhibits room with the front door and Victorian parlor. On the left, the original heavy metal  “Welcome to Franklin” and “Thanks for Visiting” signs that adorned Route 3 in West Franklin when it was the main route to the White Mountains before I-93 was built. Tourists brought considerable revenue to all the businesses—gas stations, motels, bed and breakfasts, antiques shops, ice cream sellers, restaurants, souvenir hawkers—along the road. To the right is the case dedicated to the town’s centennial (1928), the city’s centennial (1995), the city’s sesquicentennial (1978), and the country’s bicentennial (1976). Just past that is the merchandise case, with books, t-shirts, postcards, and memorabilia for sale to support the Society. 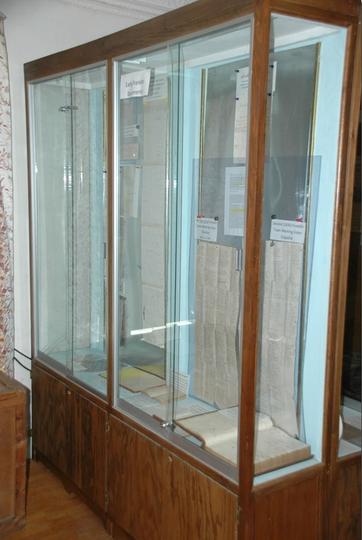 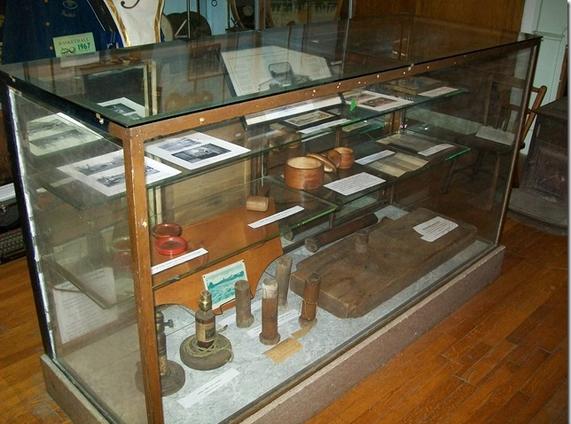 The newest display in the main exhibits room, a tribute to the Republican Bridge removed and replaced by the Daniel Webster Bridge in 1931. Includes articles that enterprising Franklin residents made from the discarded wood, mostly old growth oak, piled high during the bridge’s demolition and rescued by Franklin entrepreneurs to be repurposed into useful objects, to live on as mementos of a bygone era. Housed in a case that itself dates to commercial use, in Franklin, on Franklin Street, from the early 1900’s!

To the left, is the case filled with bits of Franklin history, from high school memorabilia to the door handles from the Webster Inn. To its right, a tribute to all the local bands which have ever been formed, with the drum set and sheet music used by the White Mountain Boys in 1939.

To its left, is the first permanent display mounted in the museum, courtesy of Marvin Blair Sr. and Jr, and Maurice Tandy, the local seaman who served aboard the boat, honoring the service of the atomic submarine Daniel Webster and its crew.

By turning slightly left, is a small “shrine” dedicated to the monumental work the Shepards did in researching, writing, and finally publishing their book (after more than six decades), and Daniel Webster, featuring a vest (a gift of the Medford, MA Historical Society) that Daniel may actually have worn while visiting Franklin to get his image captured for all posterity. The case is topped with the 1932 panoramic photograph of the dedication of the Webster Bust in front of the church in which Webster prayed, the Congregational (now the Congregational-Christian Church). 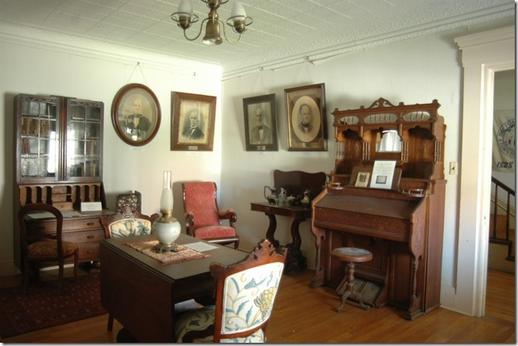