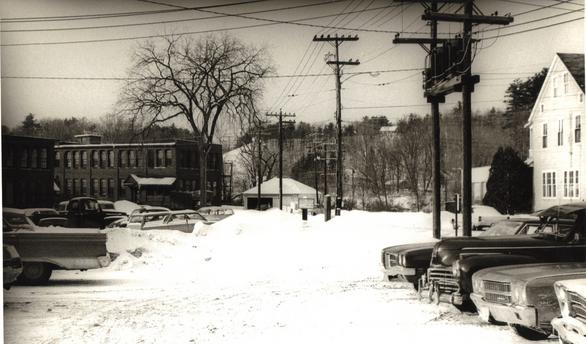 Now in the middle of a very strange New England winter, with frigid single digit cold sweeping down from the north one day, and 50 degree temps surging up from the south the next, one never knows what to expect week in and week out, despite various weather services best attempts at prognostication. The Society’s building has survived the extremes, with frequent checks on its condition, particularly during the colder periods. Setting the thermostats at minimums to prevent freezing of water pipes has so far served its purpose. A few years back a couple of upstairs doors were inadvertently closed, creating a serious problem with (warm) air flow, resulting in a frozen baseboard pipe in a far corner of the upstairs and a nasty leak through the kitchen ceiling. Fortunately it was caught and fixed quickly, with a minimum of damage to a few drop-done ceiling tiles, and setting an unforgettable lesson.

During this “dormant” period, work on inventorying and organizing continues, just not at the pace afforded by warmer conditions. This is also the time for the board and officers to meet to discuss the future of preserving the past, an important gathering that ensures the health of the organization in the coming season. Such topics as how to increase membership, speakers and programs to enjoin, projects to be undertaken, visibility and volunteerism, will all be addressed.

Gifts to the Society’s archives continue to be offered, and the Society wishes, as it does every month, to extend its heartfelt thanks to the following for their thoughtful donations: Neil Barry (via Dave Liberatore), for an 1897 “Board of Education” Report and an 1898 City Annual Report; Elizabeth Jewell, for two period area rugs; Mary and Steve Foley, for several matchbooks from the Franklin Savings Bank (for the 1978 Sesquicentennial or the 1995 Centennial?) featuring historic pictures of the Odell, Central Street views, and the “Old Williamson House”, and an 1853 copy of Charles Lanman’s (Daniel Webster’s private secretary in the last year’s of Webster’s life) “”Life of Daniel Webster”; and Glenn Laramie, for the promise of a vintage (1910) Singer sewing machine once owned by his grandmother, a long time Franklin resident, with the pledge of providing her story to make the object that much more meaningful.

The Society also wishes to acknowledge two very generous financial gifts, from the Theresa Narkiewicz Schneider Trust, and from the Melinda W. Robie Trust. Both will be added to the Society’s building fund to be put toward the inevitable repair/replacement of the Webster building’s wooden foundation sills, which have been damaged over time by water intrusion. Just saying “Thank you” hardly seems sufficient for such largesse, but know that it is most sincere, and offered with the greatest of humility.

Another service that the Society has offered in the past in response to requests from local businesses, is to provide historical images, appropriate to the venue, to grace their walls in tribute to the not-to-be-forgotten past we all share. Recipients have included the Frost Agency and Service Credit Union, with, most recently,  the latest owner of Mojalaki (which would have celebrated its centennial this year) joining their ranks.

Not all vintage photos can be considered works of art, but all have a story to tell. This month’s photo, provided by Annette Cain, was obviously considered worth capturing by someone, but why this particular angle? Was it simply to highlight winter on Memorial Street? And why blow it up to 8 x 10, elevating it to an even higher status?  Dating the cars, the picture would appear to be from the early 1970’s, and viewing it with contemporary eyes, it takes on a larger contextual meaning in that it contains buildings that now no longer exist or have changed dramatically in usage. Also notice the parking configuration, which today would be most problematic. As is the case with most images of the days long gone, this could certainly stir memories in some, of Franklin so many years ago. And that is exactly why the Society is so intent on finding, and saving, these windows to the past. Photos of just about any past age would be most welcome, and can be donated by either sending an email through the Society’s website (franklinnhhistoricalsociety.org) or by contacting the president directly at 934-8222.

See you in April when the Society reconvenes at its first 2020 regular meeting.